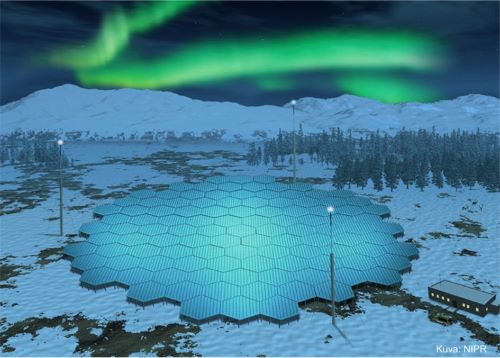 EISCAT 3D is the most advanced ionospheric radar in the world.

It is an international research infrastructure using incoherent scatter techniques to study the atmosphere and near-Earth space environment. Unlike the EISCAT UHF and VHF systems, EISCAT 3D does not use a single dish antenna, instead it will consist of five fields (phased arrays) of crossed-dipole antenna elements. These arrays are modular, built in a tessellating pattern.

The main array (core site) is in Skibötn, Norway, where the radar will both transmit and receive a powerful radar signal at 233 MHz. Four receiver sites will form beams, 'looking' into the sky illuminated by the transmitter; these sites are located from 90 to 250 km away from the core site.

The beauty of EISCAT 3D is that it combines several different techniques to produce a versatile, powerful research platform.

By using a phased array instead of a single dish, the signals measured by the antennas can be combined to make many beams, pointing in different directions. The beam direction can be switched in milliseconds rather than waiting for the dish to be mechanically steered to a new position, which takes minutes.

EISCAT 3D will image a volume in the sky, drastically improving our ability to understand what is happening in the ionosphere.

The modular nature of EISCAT 3D means that it can be split into smaller parts. It will be possible to probe inside the radar beam to look at structures that are smaller than the beam width. This is known as interferometry and by doing this as part of normal operations we will learn much more about the fine scale structure of the ionosphere.

Phased array radars already exist, but what makes EISCAT 3D unique is the use of remote receiver sites, making it the first multi-static phased array radar! This is very powerful as it will let us measure vector velocities across the field of view at multiple altitudes, a brand-new view of the upper atmosphere.

The ability to rapidly switch between beams combined with flexible transmitter operations will let EISCAT 3D 'nest' its experiments. It will be able to do more than two things at once! For example, the radar could switch between a set of near vertical beams and some at low elevation looking to the distant north and east. It will measure the small features and give the background context of the larger motions.

The radar is designed to operate continuously and will employ intelligent scheduling. Not only will it be able to run different experiments in parallel, it will also respond to changing geophysical conditions. Pre-determined triggers can be included to switch between different modes of operation; these can include EISCAT 3D observations themselves, but also potentially external triggers such as from nearby instruments (ionosondes, cameras, magnetometers) or real-time conditions in the solar wind measured by satellites.

The possibilities for using EISCAT 3D are nowhere near fully explored. We know that it will be possible to track objects in orbit, and perhaps used as a planetary radar; experiments on the ESR have shown the tropospheric winds can be retrieved. We are still learning and developing new uses for the existing EISCAT radars some 30 years after they began operations, and EISCAT 3D's potential is far from fully explored.

EISCAT 3D is due to come on-line late in 2022, with the core site at Skibötn and two of the four receiver sites at Kaiseniemi, Sweden and Karesuvanto, Finland.

The EISCAT support group is compiling ideas for new experiments to run on EISCAT 3D. If you have suggestions, please do get in touch

You can visit the official EISCAT 3D pages at the EISCAT website.